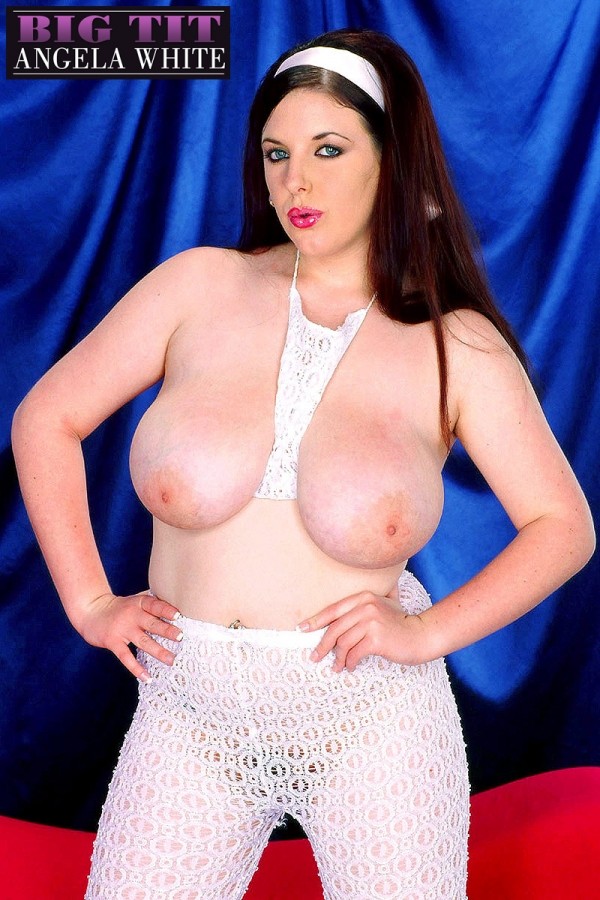 “These tits were made for jacking!” read the headline next to Angela’s photo on the cover of the December 2004 issue of Voluptuous. Angela was only 19 years old when that issue hit the newsstands, too young to buy a beer in the United States, old enough to display her fuck holes for all the world to see.

“Trust me, if I like you, you won’t need to buy me any beer to get into my pants,” Angela revealed. “I’ll be all over you. I may be only 19, but you’ve never seen a hornier teenager than me! I’d give you so much tit play. I’d suck you off so good, and I’d let you fuck my ass so hard, you’d be dying! Trust me, you’d be begging me to cool my jets.”

Trust us, Angela. We sincerely doubt that. 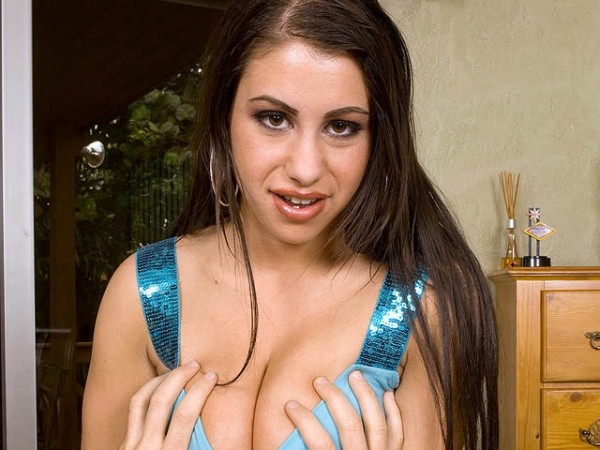 Every guy wants a busty girlfriend who is a lady in public and a total
fucking whore in the bedroom. You know what we’re talking about, right guys? We all want that chick who sports a pretty dress while you’re out and about, and then casually leans over and tells you that she is not wearing any panties. The kind of girl who is willing to fuck you and suck you off in the parking lot right before you go into a fancy restaurant. The kind of chick who waits for you to get home from work while wearing nothing but a whipped-cream bikini. The kind of chick who takes pole-dancing lessons at the gym, not to stay fit, but to give you what you deserve when you’re doing the dirty. Busty brunette Whitney Stevens is that kind of gal. She knows that in order to keep her man satisfied, she has to ho it up in the bedroom, so she gives her dude a nasty lap dance to get him going and fuck her until she creams. And who wouldn’t want that? We say all girls should rub and grind their girly-parts on cocks. It should be a requirement. 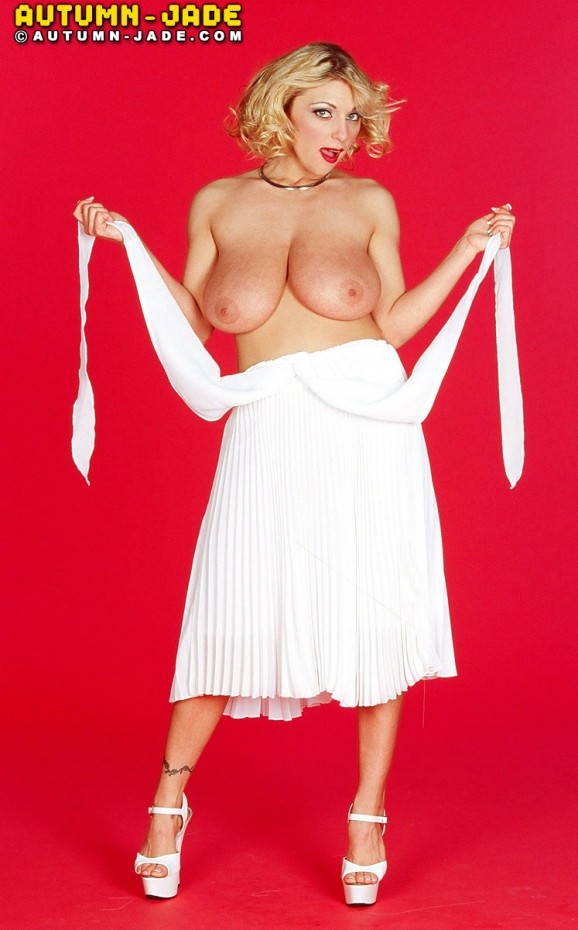 Imagine Marilyn Monroe with a dildo. Yo, wait a minute! You mean you don’t know Marilyn Monroe? Well, you know Autumn-Jade, Jack, and you know you’re here to get a funky hunk of spunk-busting boob action. So on with the show! Autumn is a huge fan of Marilyn: she collects books about her, pictures of her and has all her movies on tape or DVD. This was one shoot Autumn-Jade really wanted to do — and wow, she delivers! Miss A-J evokes the Hollywood sex goddess in a set so torrid she nearly set the studio on fire. Y’see, it’s that friction thing Autumn gets going when she works the plastic pecker into her world-class quim. So don’t get the idea this is some foo-foo excuse for the meat-beating extravaganzas you expect from our Miss Autumn. Nossirrreeee. This is a one hundred per cent stone-to-the-bone striptease and dildorama from America’s favorite — your favorite — Autumn-Jade. Give the lady a big hand. On your dick, that is.

Rock That Rack, Tap That Ass! 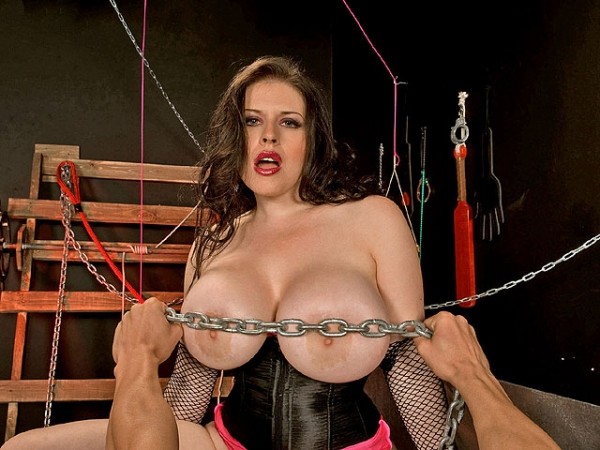 There’s nothing like a little kink to make sex better. Especially when you can get kinky with as hot a piece of ass as Daphne Rosen. Daphne is the total package: She is smart, has a great personality and she is the freakiest sex fiend you can find. This girl does it all. So when this guy wanted to experiment with some nipple clamps, she was all for it. When he whipped out the whips and chains, Daphne whipped out his cock and went to town. When he told her that he wanted to fuck her tits and her pussy and then finish off with his cock in her ass, she agreed wholeheartedly. And when he told her that he wanted to spray her down with his nut sauce she told him to do it. Because Daphne knows that the only thing better than being a big-titted cock fiend is being a big-titted cock fiend coated in cum. 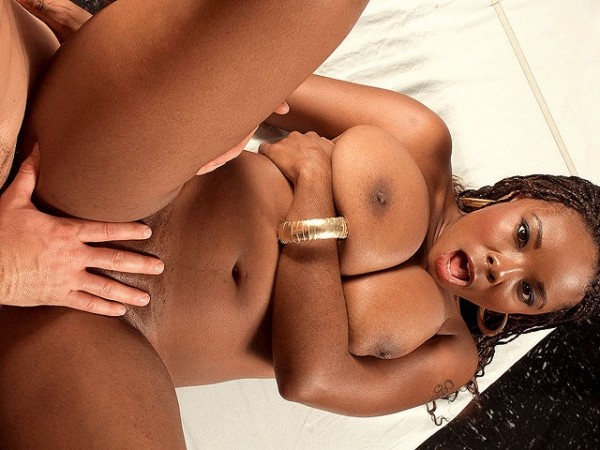 Poor Stacy. She spends so much time getting stuffed and roughed up by huge cocks that she started to feel worn down. All that jiggling and giggling can take its toll on a big hootered chick. So, since she was feeling under the weather, she decided to pay Dr. Feelgood a visit to see if he could give her anything to make her feel better. Luckily for her, this doctor specializes in big tits and tight, wet slits. One look at Stacy and he knew what the problem was. She needed more vitamin D in her diet, so he wrote her a prescription for some more dick…his. He gives her a full body check up, feeling for anything abnormal. After a thorough hands-on inspection, he asks Stacy to say, “Ahh,” and then proceeds to stuff her full. Then he checks her temperature with his meat thermometer and he figures Stacy might be running a little bit of a fever, since she seems so hot to the touch. Figuring that she needs to cool off immediately, he coats her jugs in some man sauce to cool her down and Stacy greedily spreads it around, like a good patient. Just to make sure that Stacy got the proper doctor-patient time, he scheduled a few follow-up appointments. 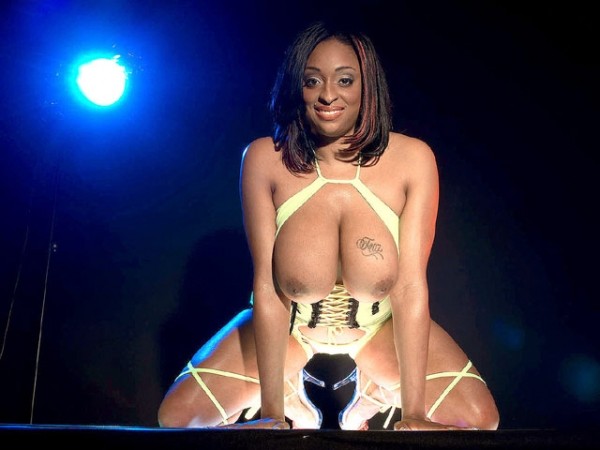 Ah, the strip club. Who doesn’t love the strip club? Loud music, naked bitches, and good times abounding…it’s like an adult amusement park. And this adult amusement park comes complete with adult beverages, food and all sorts of attractions. Apparently, there are also fun rides at this strip club, because for enough Benjamins, you can take a spin in Carmen Hayes‘ pussy. Yeah, those lying bastards who told you there was no sex in the champagne room apparently never rolled with enough cash to purchase prime ass like this. When you go to the club Carmen dances at, she gives you a great stage show and then she takes you back to the VIP room and gives you a great ho-blow. Carmen, in all her flexible glory, takes down cock like a champion. You know how they say that people who really love their jobs always do a great job? Well, we think Carmen found her true calling because not a lot of chicks look this happy shaking their asses for bucks and getting fucked, too. Carmen is all about two things: Greenbacks and lying on her back. Hey, we’re not hating on her. Make that money, baby!