Arianna Lays Down the Law and Gets Laid 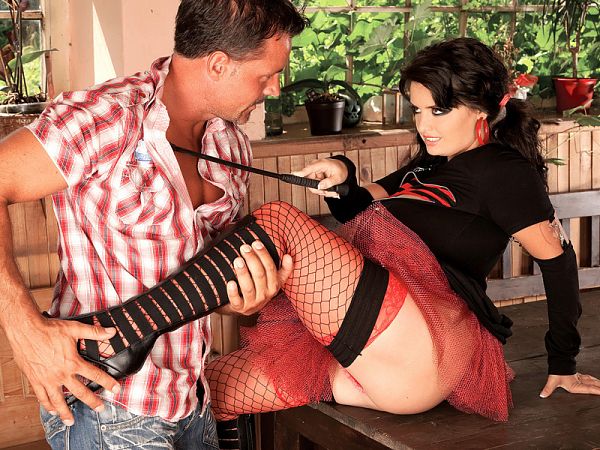 Arianna is angry.
“Hey, you are late,” she tells the deadbeat dude. “I waited for you for hours.”
His lame excuses don’t fly with Arianna, who wants people to respect her time, not keep her waiting. Really, what kind of idiot keeps a girl like Arianna waiting?
An idiot who knows what kind of punishment is in store, that’s what kind of idiot.”You always have some excuses,” Arianna says, brandishing her whip. “But this time, it won’t be easy for you. I will punish you. You will have to please me and spoil me and do what I want.” At which point, Arianna backs her round, fleshy ass into his crotch. And the punishment begins.”I want to use you,” she says. “Touch my boobs. You are not allowed to like it.”
Yeah, right. He’s also not allowed to like worshipping her feet, legs and ass. And eating her pussy. And playing with her tits. And getting his cock sucked. And fucking Arianna’s sopping-wet pussy, which he accesses when Arianna pulls aside her thong panties. “You have been a very bad boy because I waited for you for hours,” Arianna says. “I won’t forgive you.”
To err is human. To be forgiven by Arianna is divine.