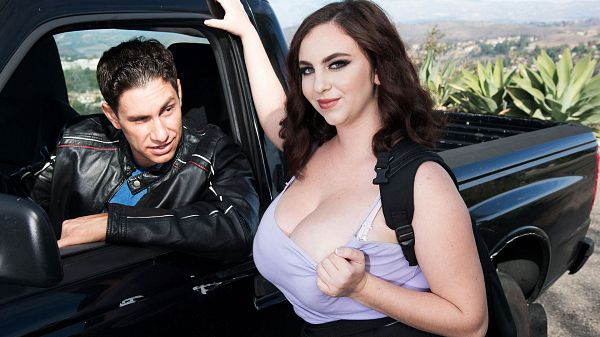 This was Milly’s second scene with a guy, so we asked her how it compared to the first.

“I was way less nervous for this scene,” Milly said. “My approach to it was to just have some fun…no stress!”

SCORELAND: On a sexual intensity level, how did it compare to your first scene?

Milly: I think it was just as intense. I liked the story line, and his cock was the biggest I’d ever taken.

SCORELAND: We have the impression you’re the same girl whether you’re at home or in one of our videos.

Milly: I am 100% the same girl at home as I am with SCORE, minus all of the glamour hair and makeup. I’m a sexual person at all times. It’s not a light switch I can turn on and off. If it is a switch, it’s probably stuck on ON.

SCORELAND: Have you actually ever flashed or jiggled your boobs at passing cars?

Milly: I’ve flashed cars for years. Never to hitchhike. Just to see people break their necks looking back at me!