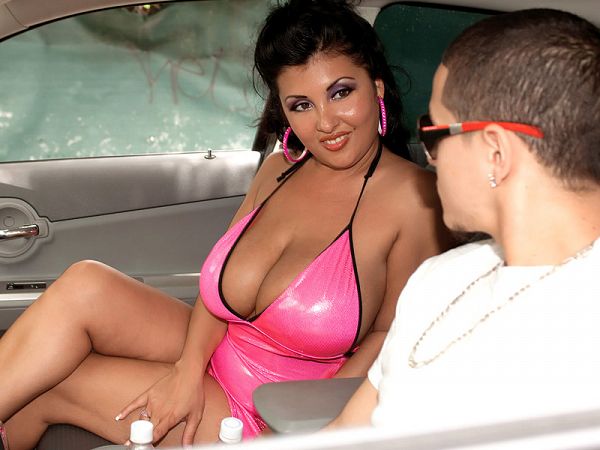 With all due respect and admiration for Daylene who really knows how to take care of a man, and has done so on SCORE sites for several years since she first got into the scene, she makes a terrific nasty street hooker in “Hooked On Daylene.” She’s got the face, the bod, the tits and the hot voice. She knows how to dress that hot bod also in a hot pink dress that Google Earthview could pick up. Trolling for tits and trim, Mr. Whorehopper takes the opposite direction of the high road that most politicians and Wall Street money men take when hooking up with pay-girls. He drives around the industrial areas of the city where the girls generously show their goodies until he finds the tootsie that puts his transmission into third gear.

Daylene hops into his car and starts playing with his stick shift which he has immediately taken out of his pants like the dirtmonger he is. Daylene begins sucking him right there, a subconscious conditioned reflex when a cock is several feet away from her mouth, no matter the time of day or the location. Mr. Whorehopper wakes up to reality and decides to whisk Daylene away to his apartment, from which he is soon to be evicted because he spends every penny on hookers. Daylene wastes no time chit-chatting or turning on the TV to watch Oprah. She knows her purpose in life and that’s getting picked up, drilled and creamed. Mr. Whorehopper is so boob-drunk and nipple-fogged that he never gets it that Daylene is actually a hot slut giving away her cunt for free but playing the curbside ho. She never asks for cash up front and she licks his cum covered cock, something no boner-fide hooker would ever do. It’s a win-win situation either way. Fucking Daylene is definitely habit forming.