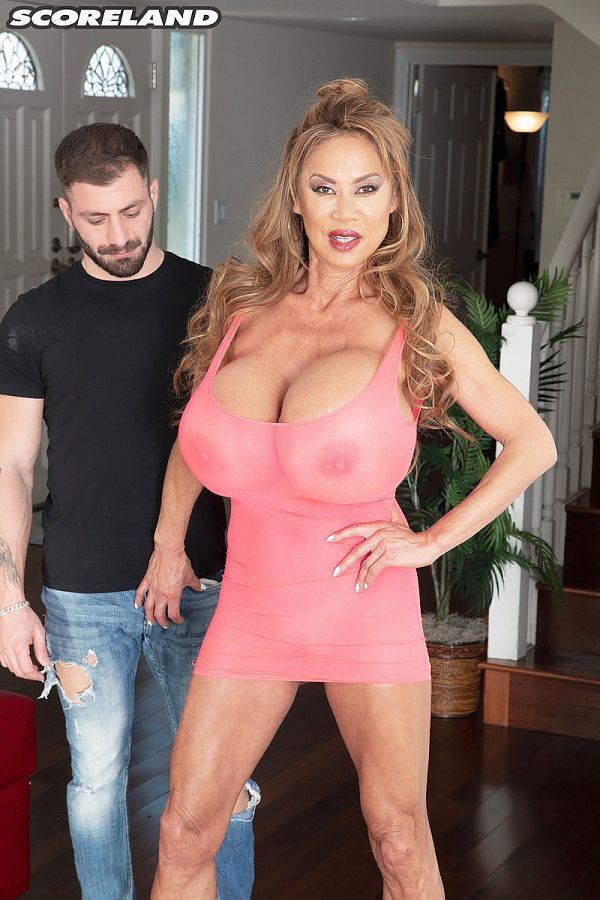 Minka is cleaning dishes in the kitchen when someone knocks at the door. For the record, Minka often wears sexy, low-cut tube dresses when she runs her domestic errands.

At the door is Jason, who introduces himself as her daughter’s boyfriend. He’s there to meet her daughter. That’s news to Minka. She takes him by the hand and leads him into the living room so she can grill him while they wait. He’s never met Minka and knows nothing about her. Doesn’t know who the world’s #1 Asian big-bust star is. Jason is clearly not a SCORE reader. He’s in for an education.

While making small talk, Jason subconsciously rubs his bulge. “Why are you playing with your dick?” Minka asks. He tells Minka he can’t control himself looking at her huge breasts and slim, tight body. Minka moves his hand and squeezes his junk, making an assessment. “Yah, you’re really big,” an impressed Minka says. “She never told me you’re this big.”

Jason asks if he can touch Minka’s tits. He gets the okay, and to make it easier, Minka lowers her dress to expose her mega-boobs. Jason quickly forgets why he’s there and who he’s there to see when Minka decides to give him a blow job. Minka usually prefers small cocks but she’ll make an exception for Jason.

See More of Minka at SCORELAND.COM!