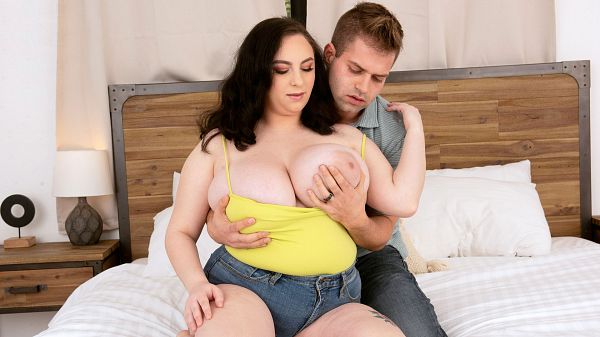 Walking around an apartment complex, Nicky Rebel spots a beautiful brunette with incredibly huge breasts. She’s putting away a beach chair. His brain malfunctions at the sight of her. This is common when guys see Milly. They often can’t even complete a sentence, and it happens to Nicky when he decides to chat Milly up. He thinks he’s seen her before but is having difficulty speaking. Milly introduces herself and, liking his looks, invites him to her place for a drink.

They go straight to the bedroom. The size of Milly’s tits and her sexy face paralyzes more of his brain cells. He sucks her nipples, palms her boobs and then undresses her. She undresses him, has him lie back and squishes his boner between her breasts, the dream of many men. Milly kneels on the bed and cups her massive breasts for his cock then gets on her back for a traditional tit-fucking, her head over the edge of the bed.

It’s time to fuck. Milly lowers her pussy over him and rides him, her amazing boobs jiggling and shaking. She turns around and goes for a cowgirl ride, twerking her ass and pumping his dick while he stuffs his face with her heavy hangers. After getting fucked on her back and from behind, Milly gets her pussy licked. She gives Nicky one more tit-fucking lick-down.

Finally, Milly cups her twin treasures once more, looks at him with hungry eyes and urges him to jerk off all over her.