Amaya May & The Bra Thief 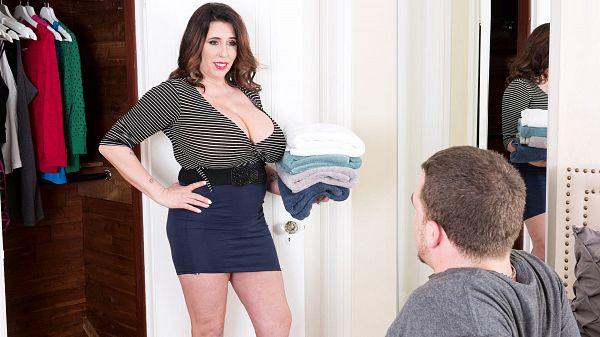 Joe has stolen one of Amaya May‘s big bras. He didn’t win it in a Voluptuous contest. Joe is in bed when Amaya finds it in his closet. She doesn’t yell at him for taking it or call the bra burglary squad. Since Joe has not been jacking all over her extra-large tit-sling, Amaya decides to put it on for him and model it before she blows, tit-fucks and bangs his brains out. Amaya really is a generous lady with a great pair of big boobs. Huge and real, in fact.

SCORELAND: Had nude modeling in front of a camera ever crossed your mind?

Amaya: Not really. I just did the webcam thing and I was good with that, and not until I was approached by SCORE did I think, “That might be something I’d consider.”

SCORELAND: Do you sometimes have to make sure guys aren’t dating you because of your big boobs?

Amaya: No, because the weird thing is that the couple of long-term relationships I’ve been in were not with boob guys. They’d say, “I couldn’t care less what size your boobs are,” and it was frustrating because I like my boobs to be played with and given lots of attention, and they would hardly pay them any attention.

Amaya: Yeah. I like anything with my tits. I want people to wanna touch them and look at them and suck on them. That’s what they’re here for!

See More of Amaya May at SCORELAND.COM!