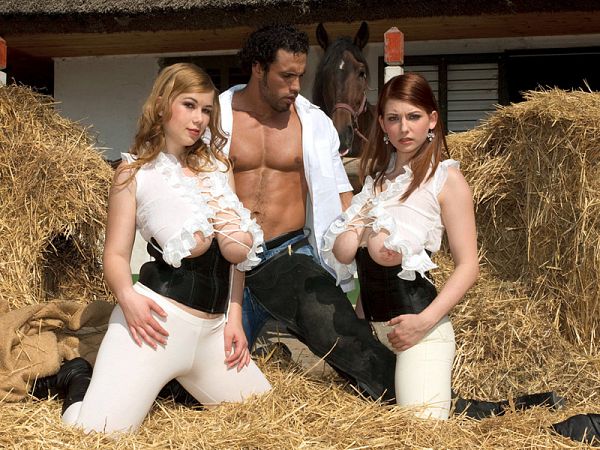 Christy Marks and Terry Nova made quite a partnership in the movie Busty Riding Academy and this scene is the centerpiece of the film as they take on two studs near the barn. Part erotic drama, part group boobapalooza, Busty Riding Academy was photographed on the grounds of an old castle near Budapest. Making hay was never this intense. “The pairing isn’t unusual because one girl is American and the other is Czech or because Terry is a big-bodied Amazonian while Christy is much more petite and her tits are really the only big part of her body,” wrote SCORE editor Dave. “The pairing is unusual because two girls couldn’t be more different.” Christy is more flexible than Terry but otherwise the girls match each other thrust for thrust as they romp and roll. “I can get into some crazy positions,” Christy said, which makes her even more of a candidate for dream girlfriend or wife. “I like to be fucked in the piledriver position. I like fucking and playing with myself at the same time. I don’t do it all the time because some guys get really self-conscious like, “Am I not doing my job right? This chick is playing with herself.” And I have to be like, “Yeah, you’re doing it right, keep going!” And I like to dirty talk during sex, too. That gets me hot. But I don’t talk a lot because most guys are not into that.”